Finally, I had some time to sightsee. I took a bus from Jeju-si to Seogwipo, a small town in the south of Jeju, then to Jungmun to see a stretch of coastline known for hexagonal rock columns. Similar to a miniature Giant’s Causeway in Ireland, Jungsanjeolli Rocks are formed as a result of rapid cooling and contraction of lava when pour into the sea. I was astounded by this nature’s sculpture. My astoundment, however, was quickly dampened by huge number of students. I disappeared into bodies of teenagers reluctantly. 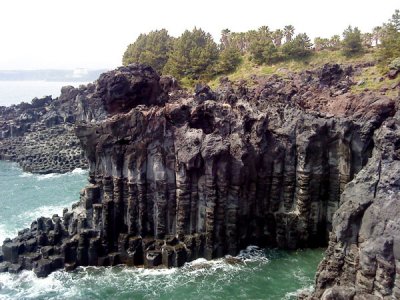 Nearby Jungsanjeolli Rocks, there is an impressive four-storey Buddhist temple, Yakcheonsa. I enjoyed some Jeju famous tangerines under the orange trees surrounded by bird songs before entering the shrine. Buddhism is not a religion, but a philosophy on how one’s spiritual world should conceive the physical world, with humbleness and altruism for others by living a basic and meaningful life, instead of egoism and materialism. 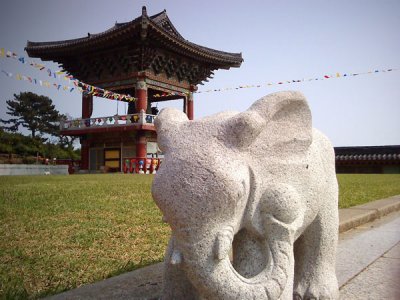 After my prayers, I left Yakcheonsa and walked towards the bus station from a small back road lined with small tangerine plantations. From the new Jungmun bus terminal, I boarded an eastbound bus to Seongsan-ri at the extreme eastern tip of Jejudo. Passing through town after town, local got on and off. More than an hour later, I was in awe when this majestic extinct volcano appeared by the coast. Ilchulbong is famous for its sunrise, hence its name Seongsan Ilchulbong. 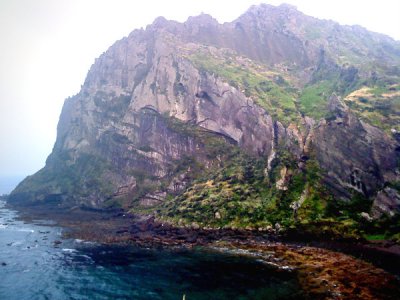 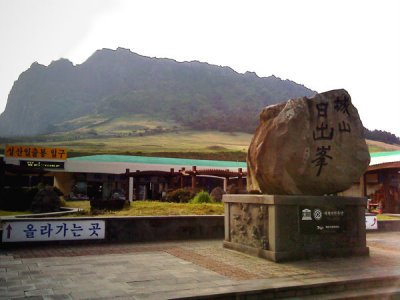 Before dinner, I enjoyed some solitary time watching sunset at the foot of Ilchulbong on a prairie full of asters. Early next morning about 4:30am, I headed to the ticket office that was still closed. So I walked around in darkness listening to the waves. After I purchased my ticket, it was only a 20-minute walk up to the forested crater where crowds gathered for sunrise. I must admit that I had seen better sunrises in various mountains in other parts of the world. Ilchulbong is still by itself a timeless and statuesque formation. Thick layers of lava curved into the coast while the splashing waves allow microscopic algae buildup to add a touch of blue and turquoise to this geological beauty, another nature’s work of art. 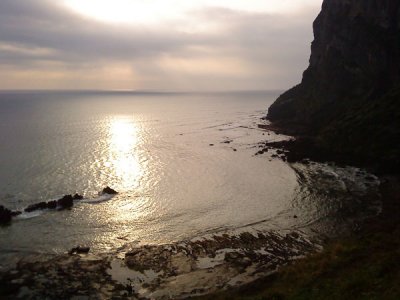 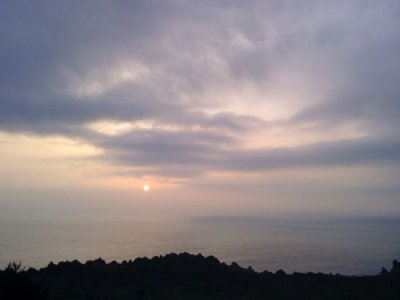 I concluded my trip by taking a bus from Seongsan-ri to the airport in Jeju-si. There I flew to airport in Seoul and left South Korea. Without setting foot in Seoul for shopping or eating, I thoroughly enjoyed natural beauty of this country. A country that has its own share of turbulent history in recent times. A country deep rooted in the value of Buddhism that breeds the slightly shy yet warm and kindhearted souls.

Previous Next Table of contents